Connect with a Mentor Today
Skip to navigation Skip to content

WHAT'S NEXT FOR CO-WORKING?

HEALTH & WELLBEING IN THE WORKPLACE

Based on your topics of interest, we’ve selected these resources just for you:

“Climate Ready Boston,” a four-phase effort that began in October 2015, is preparing the city for climate change. “Climate change is very real, and it is definitely occurring,” Paul stated. “There’s a lot of evidence, including recordbreaking high temperatures and rising sea levels. There’s also an increase in annual rainfall, but it’s not evenly distributed. We are seeing an increase in extreme storms.” Older cities have drainage systems based on rainfall patterns from 30, 40, or 50 years ago. They’re not designed to handle the kinds of storms we’ve seen recently, which leads to flooding. Because corporate real estate professionals are in charge of the built environment and “on the ground,” they can play a big role in the effort to combat the effects of climate change, he urged.

In the near term, Bud advised, flood exposure will be concentrated in South Boston, East Boston, Charlestown, and Downtown. In the late century (e.g., 2075 and later) it’s anticipated that flood exposure will expand to include vast areas of the city, including 12,000 buildings and about $80 billion in real estate. “As we start to plan and permit new buildings in the areas at greatest risk, we’ll need to consider what kinds of elevations will be required,” he said. “Should we just build a dike, like the Dutch have? Should we create a coastal protection system and do the work there, instead of protecting the city at the water’s edge? It’s a good question.” One obstacle in creating such a system, he explained, is time frame. It would be a 40-year project. And it would be expensive, so it would take political will and political support to make it happen. 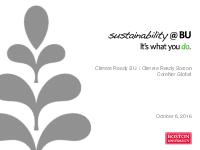 Dennis, a former architect, is Boston University’s first Director of Sustainability. The university has two campuses on 135 acres, with 322 buildings and approximately 15 million square feet of real estate. Rising sea levels are a particular concern. “The sea has risen 11 inches in Boston since the 1920s,” Dennis said. “That’s three to four times faster than the national average.” About 12 percent of the main campus would be flooded if sea levels rise by five feet beyond the current high-tide mark. Accordingly, construction and renovation activity on the campus is governed by “if you touch it, raise it” – seizing the opportunity to raise building elevations wherever and whenever feasible. All electrical and mechanical equipment in new buildings is now on the second and third floors, not in the basement. Other strategies to cope with climate change include adding more white roofs, expanding the tree canopy, and reducing the percentage of impervious surfaces. “The more we do now to reduce our carbon emissions, the better our ability to address climate change later,” Dennis concluded.

Michele began by providing some background on Unilever and its lines of business, the company’s real estate footprint, and its CRE organization. Unilever has approximately 169,000 employees around the world, delivering products in four major categories: home care, personal care, foods, and refreshments. Sustainability is key to the corporate culture. “The company wants to reduce its environmental footprint while growing,” Michele said. “Business growth is not at odds with sustainability.” Real estate management, facilities management, and travel are bundled together as Workplace Services, which is part of Enterprise & Technology Solutions (ETS). Unilever’s real estate portfolio comprises 8.9 million square meters in more than 1,400 sites around the world. 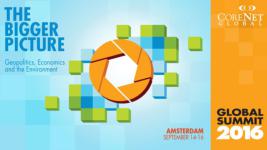 “There is no single way, no single metric, to measure knowledge-worker productivity,” Jan began. “It’s because the processes in various businesses are so complex and so different. We can’t measure it like we can a purely output-based scenario, such as manufacturing.” The key question to ask, she said, is this: What is known about the key performance indicators used to measure professional productivity in my knowledge-based business? Much can be learned, and gained, from focusing on the six factors that are correlated to knowledge-worker productivity. These include: 1) social cohesion; 2) perceived supervisory support; 3) information sharing; 4) vision and goal clarity; 5) external outreach; and 6) trust. “These are incredibly important,” Jan said, “not just nice-to-haves.” Those six factors can be considered proxy measures for productivity. “They work across all industries and sectors, and around the world,” she reported. 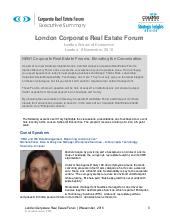 As part of our new Strategic Insights Series, CoreNet Global’s Corporate Real Estate Forums replace Discovery Forums and elevate the conversation beyond real estate alone. We’re bringing you expert speakers on today’s most pressing business challenges: Talent, Risk, Leadership, Corporate Social Responsibility, Technology, and more. They’ll not only give you the latest insights on these crucial topics, but tell you what it all means for corporate real estate management. These Forums, wherever possible, will be held at academic institutions and will draw on subject matter experts from the local academic and business community. By elevating the conversation in this way, Corporate Real Estate Forums will help our members elevate their careers and prepare to become, in the words of our Corporate Real Estate 2020© research, true “Enterprise Leaders.” 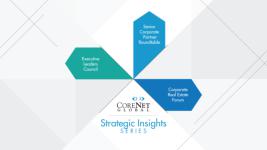 Presentation: Real Disruption: At the Intersection of Technology and Commercial Real Estate

Steve reported that there’s a “huge amount” of venture capital going into commercial real estate these days, and particularly in technology tools that are disrupting traditional ways of developing, transacting and managing real estate. Drivers behind this trend include unprecedented breakthroughs in technology (e.g., mobile devices, sensors, etc.), ubiquitous connectivity, and an increasingly tech-savvy, mobile work force that demands new apps. New technologies are providing faster, more accurate tools for decisionmaking, and predictive analytics, not just backward-looking analysis. “This creates disruptors and the disrupted,” he said. “The disruptors remove friction and speed up the process. These trends are impacting the workplace and the workspace.” Take, for example, the basic task of researching available office space. Companies such as RealMassive and TheSquareFoot are disrupting more traditional players such as CoStar and LoopNet, Steve said. Meanwhile, new entrants including StateBook and CreateRE are disrupting site-selection consultants, he added. In another example, sharing platforms such as WeWork, PivotDesk and LiquidSpace are disrupting fully serviced office providers, as well as leasing brokers and real estate attorneys, he stated. 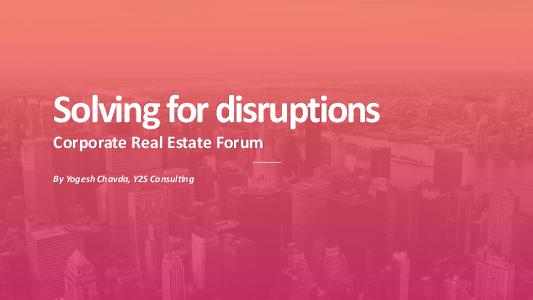 How important is it to understand – and take seriously – the new competitors who might disrupt your entire business model? We all know the answer: it’s crucial. Failing to do so can put you out of business. Yogesh underscored that key point with this quote, made by the CEO of Blockbuster in 2008: “We don’t worry too much about Redbox and Netflix.” Blockbuster’s business model was completely disrupted by these and other new players. “Disruptions are breaks in patterns, such as new channels, new products and services, and new business models,” he explained. Some of the drivers that are creating massive change in the world today include the Internet of Things (IoT), the sharing economy, mobility, artificial reality and virtual reality, among others, he stated. 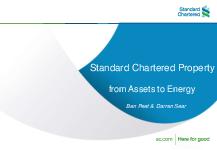 Standard Chartered Bank traces its roots all the way back to 1853. “One hundred sixty-three years later, we aspire to be the world’s leading international bank across Asia, Africa and the Middle East,” said Ben, who joined the company in 2003. The global CRE function was established in 2008. It was renamed Property in 2015, and today it reports into Group Finance. The bank operates in 68 countries. It has almost 2,200 properties, and the portfolio (15.4 million square feet) is 60 percent leased and 40 percent owned. Just eight years ago, 80 percent of the portfolio was owned, and only 20 percent leased. Interestingly, warehouse space figures prominently in the space mix “because the bank is required to keep a lot of paper records,” Ben said. There’s been a move in recent years to reduce the number of supply partners – and reduce Property headcount. Not long after acquiring Johnson Controls Global Workplace Solutions, CBRE took over a major contract that JCI had recently won, which covered 22 countries from India to Japan and almost 9 million square feet of bank space. That was a major outsourcing move, but the bank plans to do even more. Bids are currently being reviewed for a contract covering another 7 million square feet. “By early 2017, all Property delivery will be outsourced,” Ben explained. Darren reviewed a number of the bank’s energy management and environmental initiatives. “Being responsible is fundamental to Standard Chartered Bank,” he stated. Darren reported on progress the bank has made in a number of categories, including reduced energy, water and paper. “Our annual energy usage saved from 2008 is enough to power more than 33,000 homes,” he reported. 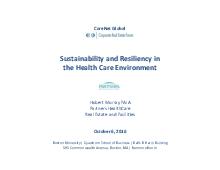 Presentation: Sustainability and Resiliency in the Health-Care Environment

Since 2008, when Hubert joined Partners HealthCare to develop a sustainability program, the company has built about 1.5 million square feet of LEED Silver and Gold facilities, made big improvements in energy efficiency, and made a lot of progress in switching from fossilbased energy to renewables. Healthier food, reduced waste, safer chemicals, and “smarter purchasing” are also contributing to the company’s overall sustainability effort across its 17 million-square-foot real estate portfolio. As Hubert explained, new hospital and health-care facilities today are incorporating principles of resilient design, and lessons learned from Superstorm Sandy (2012), the Nashville flood (2010), Hurricane Katrina (2005) and other major weather events. A wide range of risks and hazards, including storm surge, precipitation, temperature, wind, and seismic, are analyzed for each campus in the Partners HealthCare system.

If you don't have an account, you can create one.

You do not have to be a CoreNet Global member to use the Knowledge Center. However, members have access to a much broader range of resources. Join CoreNet Global today to take advantage of all that we have to offer.